LGBT groups have long been active in cities like Bangkok and Chiang Mai. But in Isaan, members of LGBT community are forming the region’s first-ever network, aiming to fight for equal rights, challenge stereotypes, and create understanding of LGBT issues.

Note: “Gender diversity” is a term used to describe those who do not identify themselves within the category of the dominant binary, heterosexual idenity. We are using LGBT here, though are aware that many feel the title is too narrow.

KHON KAEN — More than 40 members of the Isaan LGBT community came together last weekend (October 24-25) at the Faculty of Law at Khon Kaen University to launch a region-wide network and to hold what might have been Isaan’s first LGBT Pride parade.

Facilitators of the meeting, from the Bangkok-based gender activist group, Phuying Blot At, carried out activities to help participants recognize how unjust systems of power maintain themselves, narrow the way people see themselves, and often result in marginalization. Being able to identify oneself within a spectrum of gender identities is a form of empowerment and leads to a society  where everyone is afforded equality and human dignity.

The facilitators coordinated with a local student activist to arrange for participants to apply what they had learned in the meeting by holding a LGBT Pride parade that ended at the Complex building on campus where participants, joined by local high school students, took to the stage.

Participants came from more than half of the region’s provinces. The meeting was sponsored by the Isaan Record.

Atmosphere of the meeting while Watdao Chumporn of the organization, Phuying Blot Ak, facilitated the building of the network at Khon Kaen University

The “problem” of LGBTQ is not addressed directly

Kaona “Toto” Saowakun was born and raised in Khon Kaen. He says that “Isaan people place importance on relatives and family, appearances, and one’s status within the community. Having a LGBTI child or grandchild in the family is not something that every household can accept or to be brave enough to talk about.” Neither, he says, is every school ready “to provide support and protection for students who have diverse gender identities.”

“People don’t know much about the issue of diverse gender identities. It is not something talked about out loud,” he says. “When a problem is not talked about, it opens the door to oppression and suppression and LGBTI people are relegated to the shadows.”

Even though understanding can be built, Toto says, everyone will have to pitch in and help each other.

“Certainly, building a LGBTI network in Isaan will allow LGBTI persons to have a space and members will be strengthened as they’ll know that they’ll no longer have to be alone in their pain as they work to have their identity truly accepted.”

The dream of seeing marriage be equal

As for Somkhit “Bel” Kaewyok, a native of Buriram province who joined into the conversations at this meeting, says that the discussions are a good start to the building of a network and provide direction to the LGBT community. The bringing together knowledge that can be used in further network-building in each member’s community and province, helping society as a whole gain a better understanding of gender diversity.

Somkhit “Bel” Kaewyok of Buriram: I want people to see us as normal people, just like anyone else.

Bel hopes that the more the LGBTQ community can grow, the more pressure it can apply in making Thai society more equal.

“What I want to see in the future is the right to equal marriage and for everyone to see us as normal people, just like anyone else,” Bel says. “I want them to understand us more.”

A participant hailing from Srisaket province, Panote “Toei” Srinuan, says that gender diversity is accepted in Isaan society, but with conditions. People are still accustomed to certain ideas, like a katoei needs a lot of money to have in order to get a man to live with them. These beliefs are very outdated but it’s been deeply instilled in people for a long time, even within members of LGBT groups themselves.”

“The way to solve the problem,” Toei says, “is the building of networks, in Isaan and elsewhere. We have to join hands in creating understanding in order to bring change.”

Being able to be yourself…outside of Isaan

The most vocal participants were a little bit older.  Significantly, although raised in Isaan, they were only able to express themselves more fully after leaving the region.

Not all participants were members of the LGBT community. Supisara Sri-ngam is a farmer in Buriram who is also a women’s leader. She came to the meeting to understand LGBT issues better. She herself had once forbidden her own daughter from dressing as a boy. She had told her daughter at the time, “Can you not do that? You have to be sweet and gentle. You have to wear a skirt. Don’t act like a boy. I don’t like it. You are a girl and you have to become a lady.”

Supisara Sri-ngam of Buriram: LGBT people need to have a place to stand in Isaan

Hearing the experiences of LGBT people at the meeting gave her new perspectives. “I heard the stories of those here in the LGBT community. It’s opened a new world to me.” Now, she says, she understands others more and is sympathetic “with those who have had to fight and confront so many problems in order to gain social acceptance.”

Upon returning home to Buriram, Supisara wants to help parents understand their LGBT children and help become more accepting. LGBT people, she says, “need to have a place to stand in Isaan.”

Meeting participants put their understanding into practice when they set out to put on what might have been Khon Kaen’s first LGBT Pride parade. After making signs and dressing up, participants marched from the White Bridge on the KKU campus to the Complex. Along the way, they were joined by LGBT members from the local community and by high school students who have recently  been prominent on protest stages in the city.

Upon reaching their destination, some marchers took to the stage to speak about their issues.

Toto believes that this modest action may not have been just the first Pride parade in Khon Kaen, but in all of Isaan. Toto says he felt “so delighted I’m beyond words.” He felt “it was if it was the day that I’ve come back to my roots,” but this time, “in my new body.”

What impressed Toto the most was when a high school student went up on the stage and spoke about sexual intimidation and harassment by female students who reviled this student as a tut [transvestite]. It reminded Toto of his own experience and suffering, and he wished “my mother could have come and listened to what he and the others said on stage. He says that if someone like his mother could just listen and understand what he and others were calling for, the movement would find support.

The network divided up duties and each team plans to move forward on ways to further build the network. They are hoping to join in activities in Khon Kaen on Dec. 10, World Human Rights Day. 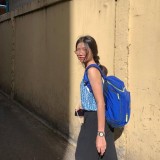 Duangthip Khanrit is a freelance reporter based in Northeast Thailand.
Scroll Up