The use of social media by Thai women living overseas, especially on Facebook, is an interesting, new phenomenon. Some have even started their own fan pages with one, Noona in Sweden, garnering over 2.6 million followers and posts reaching over 200,000 likes.

These pages are a way for Thai migrant women, many of them married to foreigners, to combine their lifestyles overseas with elements that are still clearly influenced by their former lives back home.

I spoke to “Auntie Jo” and many of her friends in the Thai diaspora in the UK about their use of social media. They introduced me to several community groups on Facebook which serve as a hub for them to congregate online. All names in this story have been changed to protect privacy.

While the focus of each group can vary, a distinct feature of most of them is the selling and buying of Thai food that is hard to come by abroad. Fulfilling their desires for food from home helps the migrants to feel less emotionally distant from their birthplaces, even when they are thousands of miles away.

In my view, these groups are not only places to communicate, but they have emerged to become cultural spaces in their own right. Their members exercise their cultural identities and seek to ease the pain of their homesickness through the buying and selling of food that they used to eat with friends and families in Thailand.

Strangely enough, they also use these online groups to arrange for local Thai food from different provinces to be sent to their loved ones back in Thailand.

I had the opportunity to interview members of the Opening the UK Fridge for Thais in Britain (เปิดตู้ UK ขายของชาวไทยในอังกฤษ) Facebook group with over 17,000 members at the time of writing. Though the name suggests that the group is for all Thais living in the UK, it is mostly frequented by Thai women married to British men who often buy and sell rural Thai food, along with all manner of first- and second-hand goods. This mercantile activity has imbued the group with the atmosphere and feel of a Thai market, and somehow gives off a real sense of being a Thai community for the many of the migrants who populate this online space.

“Looking for” is the most popular topic in the group, especially for food or rare ingredients from various regions, or other foods that are all but impossible to find outside of Thailand. From reading the posts and comments, it seems like this kind of online hunting and foraging for prized items is quite an exciting activity for the group’s members.

I spoke to Gigi, a group member from Surin province in southern Isaan who has lived in the UK for over a decade. She tells of how it used to be incredibly hard to find and purchase rural Thai foodstuffs because there was simply no place for members of the Thai diaspora to gather and communicate as easily as there is today.

The advent of Facebook groups has served to bring together Thai women living all over the UK who would otherwise be separated by distance and social disconnections. It allows them to form a network of mutual support, nostalgia, and all things that remind them of home, which is often a common theme for migrants.

Gigi mentions how she once had a serious hankering for some khanom jin nam ngiao or northern-style rice noodles in meat stew, but it was just an impossibility at that time. Not even the Thai restaurants in her town were able to produce it. Whereas today, all she has to do is post whatever she is after on the online group, and she can expect there to be no less than two other group members offering to send her that dish for an agreed price.

Even delicacies like red ant eggs and the golden apple snails, which would seem to be impossible to find in the UK otherwise, can be sourced from the group. Being able to eat these rustic foods helps to soothe the heart that is full of memories and longing for the past, members of the groups explained in interviews.

These foods are not sought after just to satisfy the craving for a certain gastronomic experience or taste. They are sought after because they represent the local culture of the places that these women come from.

This can be seen from a post by Pu: “I’m taking pre-orders so that you can eat until you stop missing home…red ants eggs in brine, 380 grams for 25 pounds… dried water snails, 100 grams for 13 pounds…” or by Noona (not her real name) who posted “fried grasshoppers…there’s a fried grasshopper vendor in this group you know! 5.50 pounds for each 100 gram pack, or two packs for 14.70 pounds including delivery…”

The emotionally-loaded language used in the posts advertising these foods is telling. It shows that there is a close relationship between the culture that the Thai migrant women badly miss and these foods. Red ant eggs, water snails, fried grasshopper, pupa, etc. are all totems of the common rural diet that these women would have enjoyed while they still lived in Isaan. Even boat noodles which, while they may be easier to find in the UK these days, the UK versions may not taste of memories quite as much as the ready-to-eat versions sent from Thailand.

“I miss home so much…the food from back home just makes me feel like it’s not so far away,” she says. “When I eat it, it helps me to miss home less.”

This phenomenon bears more than a passing resemblance to the food practices of Isaan migrant workers who went to work in Singapore during the 1980s. They maintained sticky rice as a staple while sharing food, and would even go foraging and hunting for wild food in the scrubland surrounding their domiciles to recreate the feeling of being in Isaan (as described in the work of Nanrawee Kitiarsa, 2018).

Another interesting activity that the Thai women in the UK–at least the ones in this particular online community–often agree to pay someone in Thailand to send food, especially food that is hard to find or can only be sent domestically, to their loved ones in Thailand. They do this to show how much they miss their loved ones.

Another example is Em who posted: “Do you miss your people in Thailand while you’re living in the UK? You can send them something sweet in place of your thoughts. Brown rice toffee from Phetchaburi, fragrant and sweet. For delivery in Thailand only.”

I spoke to Kob, another Thai women in the group, who says that whenever she sees certain kinds of food for sale, she knows people in her family who would like it. It makes her miss them, and she wants to be able to provide that particular food for them to eat. She once bought some sweet tamarind from a farm belonging to a fellow member in the group, and had it sent to her family in Sisaket.

A study of Isaan women in intercultural marriages with Western men living abroad by Rattana Boonmatthaya (2005) shows that with distance, certain aspects of the culture from the rural backgrounds of these Thai women abroad are often amplified instead of diminished. They still feel very much a part of their home communities in Thailand and are accordingly still quite serious about their responsibilities to their families, though they may have migrated to a far-away land.

Being on the other side of the world is no longer an obstacle to putting certain food into the mouths of their loved ones back at home. This phenomenon is similar to sending remittances to support their parents and other relatives.

It shows that these Thai women abroad still follow the culturally defined gender role of being a “good daughter.” According to Thai culture, being a good daughter means taking good care of your parents and other people in the household. The items and food that are sent to their families are physical proof of adherence to their duty as good daughters, despite their physical absence.

The buying and selling of food by the Thai women in this Facebook group is not merely an economic activity; it is also an exercise in emotional consumerism.

Similarly, sending food to family members back home is not just the manifestation of a desire for their parents and other loved ones to eat some delicacies. The gesture itself is loaded with a cultural significance that is imparted on the act by the context of the land they have departed. It also serves to satisfy their own hankering for connection to the culture of their birthplace.

Social media has become a medium for Thai women to cross great distances with their emotions. These online communities also show us how migrants challenge the obstacles presented by physical borders.

The members of these online groups function as connectors between places abroad and rural communities in Thailand. Sending food is a new online activity that shows just how deep the connection runs between Thai migrants and their families and communities back home. It also shows just how deeply ingrained the cultural and gender role of what is is to be a “good daughter.”

Translated and edited by The Isaan Record.

Read this story in Thai: 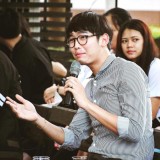 Siwakorn Ratchompoo is a researcher focusing on migration, ethnography of transnational migrant online communities and transnational marriages. He holds a Master's degree in Mekong Studies from Khon Kaen University.