Intercultural marriages between Isaan women and Western men –colloquialized as “farang–wives” or mia farang and “farang-son-in-laws” or khoei farang, respectively–have captured the curiosity of the mainstream media and society since the first decade of this century. Indeed, the early 2000s were boom times for this phenomenon.

As the phenomenon made its way into the wider mainstream’s imagination, it became the object of discussion and criticism. Mostly criticism. Most of the criticism was aimed at the ostensibly materialistic motives of the Isaan women who married Western men. They were seen as marrying chiefly, if not solely, to better the social–economic status of themselves and their families.

These poorly educated Isaan women were portrayed as emerging out of the rural hinterland to prey on Western men and take a shortcut to a better social station. Whether this is an accurate portrayal of Isaan women or not is beside the point because the truth is always more complex than any common generalizations. But what deserves to be dissected are the threads of gender, ethnic, and social discrimination that are intertwined in the context of Thailand’s economic inequality and urban-rural divide.

Thai society is hierarchical and places great stock on socio-economic status. Class divisions and treating people according to their perceived social status is the norm. Isaan is dogged by a persistent stereotype of being a region that produces barely educated servants and manual laborers. Even though present-day Isaan is vastly different from this stereotype, it still persists in the minds of many.

Where mia farang are concerned, a blend of ethnic, social, and gender discrimination is dished out. The bodies and sexual mores of women have long been placed under scrutiny and turned into a morality issue: from the way they dress, how they behave with the opposite sex, to their sexual activities and marriage.

For the mia farang who hail from the rural reaches of Isaan, the discrimination is two-fold: sexual and social. They are viewed as poorly educated rural women who use their bodies, sex, and marriage as tools for social advancement. This goes back to when Isaan women were derided as “rented wives” (mia chao) in the past for the part they played in the country’s burgeoning sex tourism industry.

Class and social status are often the means by which women in Thai society are ranked. Most of the scorn heaped on mia farang comes from Thai women of the middle-class and upwards. They regard mia farang as a stain on the overall image of Thai women in general.

This kind of stigma is a result of conveniently looking the other way when it comes to Thailand’s gaping inequality and the perpetuation of class divisions. Under Thailand’s present economic structure, much of the working class–be they in the agriculture, manufacturing, the service industry, or the various informal sectors–have low incomes and are unable to build financial wealth and are debt-ridden. Under these pressing circumstances, many are simply unable to envision a future in which they would deem as a good and successful life, especially if they have families to feed.

With such narrow opportunities, it should come as no surprise to see Thais going to seek their fortune overseas, legally or otherwise, to earn and send money back home. This includes mia farang who support and raise the living standards of the people they left behind in their rural communities. All this is happening against the backdrop of the government’s failure to address the inequality and lack of opportunity that exists in Thai society.

Women shifting their social status via marriage is nothing new. If anything, society positively expects women to marry up the social ladder. Since the Thai economy trails behind the economies of more developed countries, it is nothing strange for Thai women to seek out suitors from those countries. It is no different to a Thai woman who sets her sights on marrying a Thai police officer or banker, which is certainly not exclusive to rural Isaan.

The social-economic advancement through marriage by women from rural Isaan is challenging the traditional class system. It is an unwelcome dissonance to the middle-class ideal of what a good rural Thai person should be. It interrupts their reverie of country folk who are happy to just get by on sufficiency. God forbid that they should want to ambitiously go anywhere or change anything instead of sticking to maintaining those dear, quaint traditions of theirs.

This worldview is a kind of romanticism that refuses to look directly at the truth of the hardships being faced by rural Isaan under the current economic paradigm. It is a worldview that jealously guards the comforts and ambitions of urban Thailand as the preserve of the Thai middle-class and elites, a worldview where the rural folk know their station and are happy with their lot in life, so as to not upset the status-quo.

Translated and edited by The Isaan Record 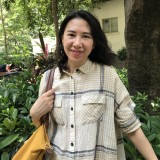 Sirijit Sunanta is assistant professor in anthropology and chair of the PhD Program in Multicultural Studies at the Research Institute for Languages and Cultures of Asia, Mahidol University, Thailand. She received her PhD in Women’s and Gender Studies from the University of British Columbia, Canada, in 2009. Her research interests include gender and migration, globalization and food cultures, and the politics of diversity in Thailand.