I’ve been fantasizing about living in Thailand for the last decade. I never imagined it would take a worldwide pandemic to make my dream a reality.

On February 6, 2020, I left my apartment in San Francisco and headed to the airport to catch a plane to Thailand as I do most winters. On my way out, Steven, the son of Chinese immigrants and owner of a dumpling shop in my building, said, “You crazy, man. Don’t go to Asia now. They have coronavirus. You should stay here, it’s safer.” At the time, his words partially made sense. China was knee deep in what would soon become a global pandemic and Thailand had the most cases of the infections outside of China. Shrugging oﬀ his advice, I proceeded to the airport and boarded my ﬂight to Bangkok.

My plan was to spend a few days in the capital before traveling to Isaan to work on a photography project and exhibition about molam musicians. In Bangkok, surgical masks were common attire and hand sanitizer was being oﬀered at the entrances to shopping malls and hotels. These measures were still foreign in my country.

A month later, I found myself in Khon Kaen in the midst of the Covid-19 outbreak. Like most countries, Thailand had begun to lockdown. Nationwide curfew was instated, the Thai New Year celebrations were cancelled and alcohol was temporarily banned. My ﬂight back to San Francisco had been cancelled multiple times. Infection rates and death tolls were rising rapidly across the globe yet Thailand’s rates were seemingly under control. The daily death tolls in the US were now in the hundreds, sometimes thousands. I extended my visa and decided to stay in Khon Kaen rather than ﬂy back to America which was now the epicenter of the virus outbreak.

In April, face masks, temperature checks, alcohol gel, and social distancing were commonplace in Khon Kaen city. With precautions I took to the streets to document this peculiar time in history.

All shopping malls, barbershops, massage parlors, and entertainment venues were closed. Restaurants were take-out only, 7-Elevens and grocery stores were now checking temperatures at their doors. Social distancing was being implemented at many of the city’s popular food stalls. Large-scale gatherings were prohibited including in places like Bueng Kaen Nakhon lake and Khon Kaen Sports Stadium. Khon Kaen Airport was only seeing a handful of ﬂights per week and the crisis’ eﬀects on the economy were quickly becoming evident. Many of the city’s residents living hand-to-mouth found themselves without enough to eat, dependent on donations to feed their families.

Meanwhile the United States was responding slowly while heavily politicizing the virus. As infections and death tolls rose into the hundreds of thousands, my home country was still debating whether or not citizens should wear face masks. Most of the country had entered some form of lockdown, self quarantine, or shelter in place. President Trump was more focused on blaming others than leading his nation through a crisis. Thirty million Americans were by then unemployed and desperate for the economy to reopen. In some states, people took to the streets demanding their cities reopen, defying social distancing practices and blocking entrances to government buildings and hospitals.

In the span of three months, Thailand and the United States have switched positions. The US is now by far the country with the most Covid-19 cases and deaths. Thailand’s numbers have remained relatively low. I’ve been lucky to be able to stay in Khon Kaen during this time. It will be interesting to see what the near future holds as countries across the world begin to open up.

The following photos were taken between mid-April and mid-May in Khon Kaen city.

Two signs, the upper one reading, “Closed according to state restrictions, stop buying, for the nation – Covid-19,” hangs on the gate of Rin Thai Silk store on Na Muang Road in downtown Khon Kaen city.

An employee welcomes customers with a temperature check and hand sanitizer  at the entrance to a 7-Eleven on Na Muang Road.

A security guard watches over the empty Khon Kaen Airport on April 27, a day with zero arrivals or departures due to Covid-19’s effects on travel.

Closed shops at an empty Central Plaza mall on April 24, a month after the government shut down all shopping malls in Thailand.

A woman carries a bag of food at a donation stall organized by a private donor at KK Ideal Home on April 28.

Ronald McDonald sits alone on a bench he usually shares with people at Central Plaza mall.

Noi sits at Bueng Kaen Nakhon lake where he usually plays petanque with his friends. Government restrictions to stop the spread of Covid-19 forced them to stop their daily social ritual.

Stools spaced a meter apart are set up for customers to sit at a safe social distance while they wait for their orders at a food truck in central Khon Kaen.

A stray dog walks by closed U-Bar, a popular nightclub in downtown Khon Kaen. All nightclubs and bars in Thailand have been forced to temporarily close to help stop the spread of Covid-19. 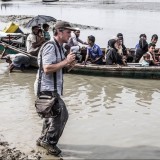 Chris Beale is an American photographer based in San Francisco and Khon Kaen, Thailand. His work has been published and exhibited internationally and often focuses on underrepresented people and cultures.