Northeast Thailand has the potential to become a solar power hub. But with high installation costs, the government should do more to promote the use of alternative energy.

The Thai government’s efforts for energy conservation and efficiency resulted in the 1992 Energy Conservation Promotion Act. Later the law was amended to push government agencies and the private sector to take energy saving measures and include the use of renewable energy to produce electricity. The Alternative Energy Development Plan for 2015-2036 aims to push the share of renewable energy consumption to 30 percent in 2036, compared to 12 percent in 2014.

For example, fifteen years ago, the price of a solar cell kit used to be 70-100 baht per watt. At the time of writing, the average cost is around 35-40 baht per watt.

The costs depend on the type, size, and manufacture of the equipment. They can be easily bought and sold with no restrictions, leading to growing interest in alternative energy.

Rooftop solar cell systems have been garnering more and more interest. The system can be installed directly onto the roof of an existing structure without the need to create additional horizontal space or additional structures.

Based on an example from Sakon Nakhon province, a three-kilowatt solar rooftop system needs an area of around 20 square meters and can generate an average of 350 units of electricity per month. This translates into an electricity bill of around 1,370 baht according to the Provincial Electricity Authority’s (PEA) current rates. The cost of installation is around 120,000 baht and the break-even point would be around seven years of use. As solar cell systems can be used for up to 25 years, the installation is worth the cost.

According to 2017 data from the Ministry of Energy’s Department of Alternative Energy Development and Efficiency, areas in the Central region and the Northeast receive the highest amount of sunlight, especially in Surin, Ubon Ratchathani, Sisaket, Buriram, and Roi Et provinces. Average solar radiation across the region is around 17.3-18.59 megajoule/m2 per day, peaking in April.

Apart from the intensity of solar radiation, the climate is another important factor in electricity generation. Most areas in the northeastern region have a tropical climate with hot weather and clear skies. Rain comes and goes in the rainy season but it hardly ever rains continuously for very long.

This is the reason why the region is an appropriate area for generating electricity from solar cells. Solar cells are also popular among farmers in remote areas which may not have easy access to the PEA’s power lines.

Thanks to their increasing affordability, portable solar cell kits are well positioned to replace petrol-engine powered water pumps, given the high price of fuel and the undesirability of greenhouse gasses.

Is wind energy another option?

Power generation using other sources of alternative energy such as wind turbines are also appropriate in some provinces in the Northeast. Many provinces such as Nakhon Ratchasima, Chaiyaphum, Roi Et, and Udon Thani have an average wind speed of around 3.44 metres per second throughout the year.

In areas with a wind speed of less than 2.5 metres per second, it is possible to use wind turbines for low wind speed. But since the costs per unit of production is still high, the payback period is long and is therefore not popular commercially.

Nowadays, wind turbines in the northeastern region are mostly operated by the private sector. In Nakhon Ratchasima and Chaiyaphum provinces, turbines with a voltage level of 115 kV are connected to the Electricity Generating Authority of Thailand’s (EGAT) power transmission lines.

Based on the government’s policy to promote renewable energy in line with the Alternative Energy Development Plan, the private sector can build small renewable energy power plants and produce electricity which the state will buy at a higher rate than the standard rate. The main agencies responsible for this are EGAT, PEA, and the Metropolitan Electricity Authority, and the policy has been well received by the private sector.

But some private operators are still facing problems in connecting their power plants to the grid. One reason is the need for a sufficiently high electrical load to connect in any area. This is partly related to the quality and consistency of the electricity generated, which has to follow certain official standards. The government is currently phasing out some of these policies.

The efforts to promote renewable energy has generally resulted in lower installation costs overall and a higher number of manufacturers and distributors. There is also a trend towards independent electricity production without the need to connect to the main grid. In some cases, alternative power producers will connect to the main electricity system but not sell electricity back to the electricity authorities.

Challenges in the Northeast

Isaan has the land area and sunlight to make it appropriate for the widespread installation of solar cell systems. There are also several areas in the region where there is no electricity. With easy access to solar cell systems, low prices, and a dynamic equipment and service market, the Northeast has much growth potential for solar energy.

But it turns out that there are still few solar cell systems in Isaan compared to the eastern or northern regions. The main reasons are government policies, cost of production, and public attitudes.

Current government policies that promote public and commercial use of alternative energy include lowered taxes for agencies using solar cells or subsidizing the installation of solar cells in government buildings or large factories.

Subsidies can cover 70 percent or sometimes even 100 percent of the total investment, depending on the government project. Many government agencies wait for budgetary support from the government before installing such systems. This is similar to the private sector companies that only put aside a budget for energy conservation in their factories or workplaces if the government provides partial funding. It is also because some companies still consider alternative energy systems to be a high capital investment that requires specialized maintenance.

The organizations that tend to receive subsidies are large agencies with high energy consumption. The installation of a large solar cell systems results in a cheaper energy cost of 35-45 baht per watt, with a return on investment period of less than ten years.

Business operators tend to regard investment in alternative energy worthy only if costs can be recouped within five years. But factories in Isaan are mostly small and medium-sized factories that would install smaller solar cell panel systems with a break-even point after eight to ten years. For this reason, only a few companies in Isaan have decided to set up alternative energy systems.

At the same time, there are not many private households that use solar cells. The large amount of agricultural area in Isaan could benefit from using solar cells to power water pumps or to use in various other agricultural activities.

But not many people have been making use of this, as the systems are considered expensive. Even an investment of around 120,000 baht per family, which would take more than ten years to see a return on investment, might be too much for most families in the Northeast.

Another problem is maintenance. The most affordable equipment often comes with no warranty and may have a short lifespan. Without well established service centers, damaged equipment may have to be replaced rather than repaired. Consumers consider this type of electricity generating system difficult to maintain, with no specialized technicians around who can fix the system quickly. The result is wasted money and a technology that is ultimately unable to meet their needs.

A first step to address these challenges and boost the use of solar power would be that the government comes up with a quality control mechanism for equipment and as well as establishing controls for the price per unit.

For instance, government labelling of electrical appliances by efficiency on a scale of 1 – 5 has resulted in the vast majority of consumers purchasing appliances with the highest ratings. Official product and price control measures have a strong potential to influence purchasing behavior.

The government should also allocate subsidies for the general public and not just for government agencies and the private sector, with different measures such as promoting zero-percent interest loans to encourage people to shift to alternative energy.

Subsidies could be initially aimed at farmers who work all year round, small to medium-sized factories or small government agencies. These groups might be deterred from investing in renewable energy production due to the high cost relative to their income, even though they are far greater in number than larger organizations. Subsidies should reach all levels of the population regardless of their electricity consumption.

One important thing to consider is that the knowledge and understanding of electricity production using solar cells can be learned via the internet which is not only a source of information but also a channel to promote certain products.

However, sometimes this information is not enough. When a problem occurs with the equipment, technicians with general expertise might be able to fix it to a certain extent. But if the equipment is complicated, a technician or engineer with expertise in this area is needed to solve the problem.

Providing specialized education in this field is important for the general public or various agencies to understand the way the system works, the controls, maintenance, and for the control of electricity usage in line with solar cell electricity production.

These are the barriers which must be overcome in order for renewable energy production to be commonplace in all areas of Thai society.

This story was first published in Thai. Translated by The Isaan Record 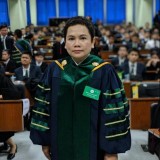 Supalak Sathiracheewin is a lecturer in electrical engineering at Kasetsart University Chalermphrakiat Sakon Nakhon Campus. She has been studying energy conservation and alternative energy for 15 years, and has been involved in many solar cell system design projects.